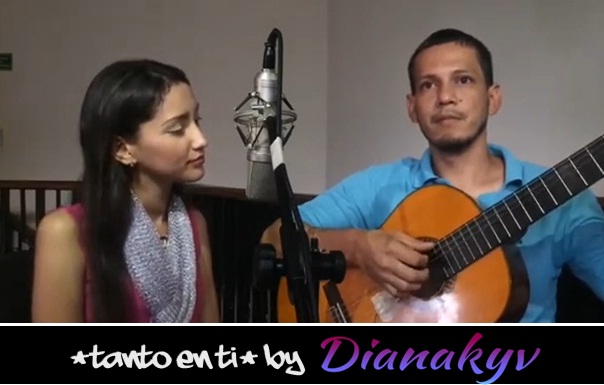 I am again pleased to be with you for 3 speak sharing musical content, this time I present a song with which I fell in love from the first time I heard it. "Tanto en ti" was written by Lubert Pulval, an excellent man born on Isla Margarita-Venezuela, with visual impairment since he was 2 years old, due to retinoblastoma (cancer of the retina). He studied from preschool through elementary school in a school for the blind, where he learned to write Braile, and took his first steps in music at age 5. The first instrument he played was the "Venezuelan Cuatro", playing in the school's musical group. It also started with singing.

At the age of 11 he entered the Baccalaureate and simultaneously ventured into the guitar. There he participated in the school events of the Lyceum and cultural events. At 15, he started composing his own songs. At the age of 17 the piano came into his life and it is there that he discovers that this is his favorite instrument. Since he was in Caracas at that time, he looked for a way to study music at a professional level, but due to his disability, many doors were closed to him since many told him that "he was not going to be able to read music." That led him to learn the piano self-taught. The street was the stage for him, along with other musicians, to develop his skills as a pianist. For his 19 years he lacked money to pay teachers, although he met two who passed on their knowledge a little, Jerry Wells and Fernando Padilla.

Near his 25 years he met Jesus our Lord, thus accepting the evangeli. In 2009 he recorded a solo album. In 2015, he was diagnosed with another cancer tumor, a leiomyosarcoma, in the left upper jaw. The operation would mean the complete extraction of the maxilla, but 15 days before he entered the studio and produced a record "totally for God." Even the doctors anticipated that he would not sing anymore. "But God worked in his healing." A few years earlier, on Margarita Island, he had formed the group "Parranderos de la Paz", where he learned to produce music, and they became the most important group in traditional Margarita music. But in recent times he began to compose themes with biblical lyrics, until he finally decided to leave Venezuela and just on May 10, 2018, he came to Argentina for various reasons, one, due to the political, social and economic situation that the country was experiencing. At that time, but also, knowing that in Buenos Aires there was the National Polyphonic Blind Choir, belonging to the Secretary of Culture of the Nation. He currently works at the Teatro Ciego Company, as one of the musicalizers.

Una vez mas, gracias por leerme seguirme y escucharme
Once again, thanks for reading follow me and listen to me

Una cascada que querrás visitar -A waterfall that you will want to visit (Spanish-ingles)
jlufer
6 views 3 weeks ago $
05:07